You are here: Home » HS Student of the Month » Samuel Kroll 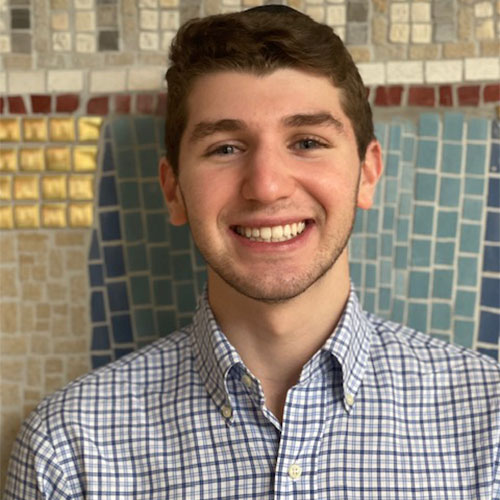 He is trying to decide whether to be a doctor or a lawyer.  He is persistent.  He is a serious sports guy and is a huge Yankees fan.  He has a great sense of humor and can sing.  He is going to attend Yeshiva University Honors program.  Guess who?

The first Student of the Month for 2022.  Senior Sammy Kroll.

Sammy says that he feels that a career path or really anything can be accomplished with unwavering persistence saying that “no matter how, even if you fail, keep going.”  This is one of the reasons he chose to undertake one of the lead roles as Michael Banks in North Shore’s production of Mary Poppins.  It was way out of his comfort zone, but he wanted to push himself into a new realm.  Knowing he could sing well, as he’s a member of the North Shore choir, he felt confident he had that aspect of the role covered.  However, acting live on stage was a whole different thing.  He dug deep and called upon his favorite self-advice: “Try it, or you could miss out.”  Sammy didn’t just try; he was a shining star.  The cast became family from friends, and the experience is his second favorite of his high school career.

Sammy’s most treasured moments, however, are with the Debate Club.  He says the faculty advisor was very tough with high expectations, but it turned him into an excellent public speaker.  Being thoroughly prepared for each topic gave him a great feeling of accomplishment and satisfaction that he again leapt out of his comfort zone.  As a result, he went on to join both Penn and Yale Model Congress and enjoyed debating bills on hot topics including free tuition and economic policy.  As a member of DECA, Sammy won the Nassau County regional entrepreneurial competition pitching multiple original business ideas to the judges.  He is currently captain of Torah Bowl and proud that his team competes well against more traditional yeshivas.  As a member of varsity College Bowl, Sammy specializes in historical and current events trivia.  Stretching his more creative side, this year Sammy is Associate Editor of the senior yearbook.  He found he has a knack for organizing and production and appreciates Mrs. Zabinsky’s patience and knowledge.

In the non-academic realm, Sammy is all about baseball.  He watches his Yankees (but appreciates the Dodgers as an homage to his grandfather’s Brooklyn roots), and he is captain of North Shore’s varsity team playing short stop and now third base.  He enjoys the camaraderie, exercising his excellent team building skills and of course the excitement of the actual games against other schools.  Then there’s chess.  As a member of the school Chess Team, not only does he play competitive chess against other schools, but he enjoys a bit of family competition as well.  He proudly reports that he was able to beat his brother (a North Shore alum) twice.

Community involvement is high on Sammy’s list of priorities.  He is the synagogue Head Youth Leader of fifth through seventh grade boys aptly teaching them how to pray and about respect and decorum.  Prior to this position, he was a Bnei Akiva Head Youth Leader working with younger children.  He also helps his fellow students as a Peer Tutor with his expertise in French language.

This past summer Sammy took an EMT course and is looking forward to sitting for the exam to enable him to work on an ambulance.  In addition, he had a rewarding position working as a waiter serving over 1600 campers each day at Camp Moshava in Pennsylvania.  The camp emphasizes the importance of interpersonal relationships, social justice and contributing to community within the framework of Torah and Halacha.  He made a lot of friends with the many Israelis also working at the camp and says he has a newfound and deep appreciation of waitstaff.

On a lighter note – Sammy’s hobbies include singing, sports, and video games.  His favorite food is pizza but must eat it folded, and his favorite color, orange, is unexpected.

While Sammy has an accomplished academic high school career with National Honor Society, numerous subject-based honor societies and many challenging co-curricular involvements to his credit, he has maintained a great sense of humor, an open and approachable nature, and a high level of enthusiasm about school, life, and his future.  He says that the thing he most loves about North Shore is how well-rounded it is and enabling him to get his hands to many varied experiences.  Whether he takes the road to being a doctor or the road to becoming a lawyer, we know we will keep his name at the ready.  His level of persistence and can-do attitude will certainly place him on the high road of success.

Congratulations and best of luck Sammy!