You are here: Home » HS Student of the Month » Jasmin Edalati 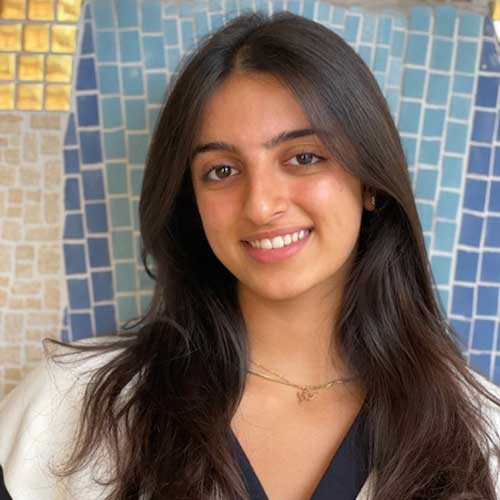 If everyone could use only two words to describe themselves, the two words North Shore’s November Student of the Month, senior Jasmin Edalati, would use are “loves kids.”

Jasmin knew as early as the ninth grade that she wanted to work with children as her life’s path.  The ability to intuitively understand and communicate with children comes as naturally to her as breathing.  Education or psychology, or a combination of the two, are both on her radar.  Her open, mature, approachable and bubbly personality will serve her well.  These qualities were recognized by her peers, when they selected her to be on the Headmaster’s Council, one of her favorite experiences.  Jasmin says she feels a deep responsibility to her fellow students and to the school itself and takes this position very seriously.  She especially enjoys the brainstorming sessions with the rest of the council team members and seeing their ideas and suggestions implemented.  They have even put together a Google form for all students to share their own ideas and thoughts about how to improve life at North Shore.

As a multi-passionate person, Jasmin expresses her fervent interest in her other activities with an equal level of enthusiasm.  Jasmin is not only creative in the idea realm but is verbally and artistically creative as well.  The Creative Writing Club with Mrs. Zabinsky is at the top of her list.  Whether she is writing in stream-of-consciousness for relaxation or writing poetry and short stories to submit to competitions, Jasmin loves this form of self-expression.  Then there’s the yearbook where the comedy section benefits from Jasmin’s wit and ability to capture the humor in photographs and write about it.

Speaking of photographs, another artistic endeavor high on Jasmin’s list is photography.  Her mom is a professional photographer, and they share that skill, pursuit and talent.  As an avid member of the Photography Club, Jasmin was inspired by and encouraged by her mom to join and bring her unique eye to the camera to take candid pictures of day-to-day life both in and out of North Shore.  Creativity also presents itself if you take a peek inside her backpack.  Her plethora of colored markers and pencils and notebook doodles show her colorful and fun nature.

Jasmin loved sports.  She has been skiing since the age of four, plays a mean game of tennis, and is the team captain for both the varsity Soccer team and Volleyball team.  She shares her sporty skills with children by running Sunday morning soccer classes for families and ran a soccer camp out of her back yard for kids from elementary through middle school age.  Last summer, Jasmin expanded her camp business by running a backyard summer camp for young girls.  She hired a staff of lifeguards and friends as counselors, calculated pricing and salaries and loved every minute of her entrepreneurial endeavor.  That same summer, Jasmin traveled to Israel with the NCSY and also participated in an internship in a pediatrician’s office shadowing the doctor.  She discovered that while medicine is fascinating and challenging, the part she most enjoyed was the interpersonal interaction with the children and their families.  This served to further fuel her desire to study pediatric psychology and education.

In addition to her love of academics and sports, Jasmin finds business and public speaking of great interest as well.  She is an active member of both the Real Estate club and the Business Explorers club, as well as Penn and Yale Model Congress and Debate Club.  She says that everything is a learning experience and each can only build on the other for a path to success in life.  That’s a great point of view!

One of the things most near and dear to Jasmin is the practice of Chesed as often as possible.  Her community involvement is an impressive list of giving.  She volunteers with the Mashadi Sisterhood organizing holiday and charity events, bakes challah for Refuah Shleima, runs clothing drives, delivers food with the Tomchei Shabbat program and participates in the Chai Lifeline Bike4Chai ride every summer.  However, the venture she loves most is the Gamach organization started by her grandmother.  She is inspired by her grandmother’s insight and how in the space of her garage, she implemented a simple idea of a way to help others.  She began collecting clothing, furniture, toys and food and quickly became known as a place where people could drop off what they were no longer using so that less fortunate people could “shop”, take what they needed and maintain their dignity no matter their circumstance.  This small act has, over the years, grown into a family legacy that Jasmin intends to keep.

Jasmin Edalati is kind of a force of nature.  She is like a warm breeze that brings positivity and lightness through a space.  She offers happiness and comfort like her favorite food Ash-e Dandoon (made by her grandmothers of course) and finds the fun in every moment as reflected in her smile.  Her favorite things about North Shore?  The effort that teachers put into getting students to enjoy their respective subject, the way Dr. Vitow works so hard to make the school environment fun and a well-balanced experience, and finally the sense of family within the school as a whole.

This totality of thought is also aligned with her choice of a favorite color.  Actually she doesn’t have just one.  All of them are favorites at different times, but if she had to select just one it would be White.  Why?  Because White encompasses all of the colors of light refracted in the spectrum.  It is the total of all the colors put together. This is the way Jasmin chooses to experience life.  How great is that?  We know with her drive, passion and personal philosophy, Jasmin will only go on to great success!