You are here: Home » HS Student of the Month » Chloe Ganjian 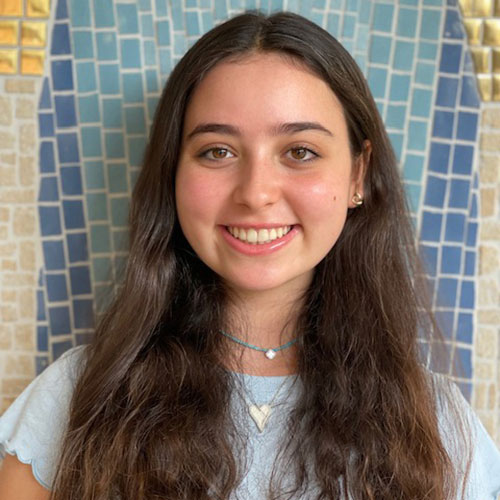 Decisions.  Decisions.  Important ones are always a bit of a challenge. The hardest kind being between two equally loved paths in life. This is the interesting situation faced by North Shore’s October Student of the Month – Junior Chloe Ganjian.

Chloe loves both Medical Science and Law and fortunately has the talent required for each.  A perfect example of her high-level capability is the two internships she engaged in this past summer.  First, Chloe interned (part in-office and part virtual) for a Supreme Court judge in Mineola who specializes in Guardianship.  She is the youngest intern ever selected and worked alongside interns currently attending law school.  She enjoyed attending the client hearings and lectures given by attorneys and other judges.  The second internship she applied for and was accepted into, was a virtual research assistant program working for a University of Massachusetts scientist.  The topic was breast cancer research specifically focusing on how environmental pollutants such as BPA and BPS, (chemical cousins that are commonly found in plastics, food and beverage can linings, and other consumer products) cause hormone disruption.  Chloe interviewed advocates to spread awareness about these endocrine disruptors and environmental pollutants.  At the conclusion, she presented her work to a New York State Assemblywoman and Nassau County Legislators.

Presenting and public speaking are two more of Chloe’s loves and talents.  Taking initiative, getting involved and having a lot to say are high on her list of activities she enjoys!  Putting these gifts to good use, she is a member of North Shore’s Mock Trial team (lead participant last year advancing to Nassau County finals), Debate team, Model UN, Model Congress and Vice President of DECA.  In the science domain, Chloe took action and approached Mr. Wykes to restart Science Society.  She successfully contacted various professors at Penn and other universities inviting them to be guest speakers to the forty-plus student membership, participated in Medical Minds, and is a science and math peer tutor.  Bridging the space between science and law, Chloe is President of Girls Who Code and Creative Writing Editor and Creative Director for North Shore Notes.

Chloe has a long list of awards and accomplishments accrued in her first two years at North Shore.  Some of the highlights include a Scholastic Silver Key writing award for her “Light in the Darkness” essay, a Gold Medal at the Al Kalfus Long Island Math Fair for her work on investigating visual and auditory memory and sequencing therapeutics for Alzheimer’s patients that was also selected to be published in the “Journal of High School Research”, and as a member of the Yeshiva Debate League, she had the highest individual ranking in a tournament.  Chloe also found out that she has been accepted into the Write On For Israel program, a two-year leadership and education program, that will culminate in an intensive, issues-driven group trip to Israel next year.  This is just a small sampling of her achievements.

Another of Chloe’s passions is Chesed.  She feels her life would not be complete without giving back to her community.  In addition to being a member of the school Chesed Club, Chloe decided to take her passion to the next level by starting a program she aptly named “Virtual Buddies”.  She discovered that many young children were having issues with online learning and missing group activities while at home.  She put together a one time per week online class for elementary age children that encompassed some subject tutoring, arts and crafts and even some Zumba.  It was a big hit, and now the program is still going and growing!

Chloe’s favorite color is Pale Blue, spicy tuna and salmon avocado rolls are her food of choice, although she enjoys an episode of “Gilmore Girls” from time to time – she prefers to do rather than to watch. When hanging out with her friends they enjoy walking, bike riding and kick boxing together.  Lastly, (not really but…) she loves reading both fiction and non-fiction books that captivate and challenge her.

Whether Chloe’s path will take her down the medical path, legal path, a combination of the two or something entirely different, there is no question it will be even more fascinating and enchanting than the yellow brick road. Even better than the Emerald City, the world is her oyster, and the size of her pearl is the universe in her hands.