You are here: Home » HS Student of the Month » Isaac Croog 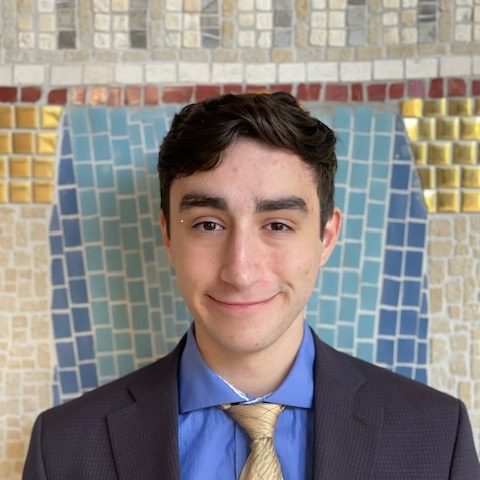 Writes about ethical and social implications of science and technology.  Invents an automated kickstand.  Knows how to generate random numbers for encryption.  Plays the guitar.  Who is this talented person you ask?  The first student of the month for the 2021-2022 school year – Isaac Croog.

Isaac (aka Ikey) is an incoming senior this year.  He is one of those natural goal setters and achievers who just decides to do it and does it and does it the best.  Isaac placed first in the New York Youth Summit science and engineering competition with his project paper The Moral Implications of Artificial Intelligence.  He also placed first at the North Shore STEM Fair with his engineering project Automating a Bicycle Kickstand for Safety and Training Use by building an automatically deploying kickstand.  We could all use one of those!

When deciding where to attend high school, Ikey did his research choosing North Shore for how different it was to other schools, for the level of academic challenge and variety and for the “really nice kids.”  Ikey has an inquiring mind by nature.  He enjoys observing and analyzing and coming up with interesting and original solutions to a multitude of conundrums.  In his exploration into science research Ikey worked with his faculty advisor to develop a way to generate random numbers for encryption using RGB pixel data.  He took a pixilated image, selected a single pixel, and for each color of pixel assigned an associated number thereby creating a true random number for use in encrypting information.

This past summer Ikey engaged in a virtual computer science internship at Brown University.  He has been working with their research team to take 2-D images and transform them into a 3-D product.  He has been such a successful asset that they requested he continue with his work during this school year and aid them in publishing their final project research paper!  Way to go Ikey!

Since there is research showing that the brain processes math (and some say computer language as well) and music in a similar way, it comes as no surprise that Ikey is also an accomplished musician.  He plays both the acoustic and electric guitar preferring alternative rock and 90’s music, and also plays saxophone.  Apparently, music is not his only performance talent – Ikey has written and performed original comedy sketches for the Gotham Comedy Club in NYC.  He must have utilized the presentation skills learned at Model Congress, Mock Trial and on the Debate Team…

Even with all his academic pursuits and studies, Ikey makes time for playing outdoor soccer and video games with his friends, visiting museums especially the Museum of Natural History (he is a history buff), and working at the JCC Camp Friendship as a counselor for children with special needs.  He has a great sense of humor, is a Chinese food aficionado, a lover of chocolate baked goods and very dark blue is his preferred color.

He says that as he approaches the beginning of the end of his time at North Shore he sees that the experience has been different than what he expected – in the best way possible.  He will carry the belief that he shares with his closest friends:  to know yourself and do what you feel is most right and most want in life.  As a leader rather than a follower, Isaac (Ikey) Croog will surely succeed with his words to live by.

Have a terrific year Ikey!  Best of Luck!