You are here: Home » HS Student of the Month » Tamir Cohen 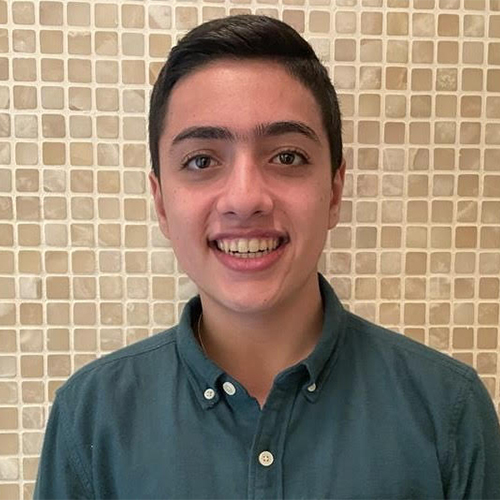 Meet Tamir Cohen, our NSHAHS February 2021 Student of the Month!

This month marks the selection of the forty-third Student of the Month. Forty-three is a prime number. It is the Periodic table number of the element Technetium and is extremely rare. In popular culture, the number forty-three refers to abilities, discipline, commitment, perseverance and the desire for achievement. The forty-third Student of the Month is sophomore Tamir Cohen.

Tamir has all those attributes and more. Note that since 2016 when the Student of the Month program was begun, there have been but three other sophomores selected. This is big nod to the level of excellence already displayed by Tamir.

There is a plethora of passions in Tamir’s repertoire that range from real estate to Daf Yomi to tennis to name just a few. He sees things as they are and his creativity takes over to make them into what will be his best experience. In school he is an avid member of DECA with Mr. Garfinkel, Mock Trial with Mr. Muir and is a writer for North Shore Notes with Mrs. Zabinsky. Tamir most enjoys writing opinion pieces and Dvar Torah, because he loves Judaic studies.

In line with his love of business and math, his current favorite secular subject is AP Macroeconomics with Mrs. Goldschmidt. (This class is not usually for sophomores, but Dr. Vitow gave him permission.) He is also a member of Mr. Nagel’s Traveling Math Team. Tamir says his mind is about sixty-five percent logic and thirty-five percent creative, so he really enjoys the challenge of numbers and finding the path to a clear solution to mathematical problems. He feels he has vision but appreciates how concrete figures makes it come to life. Tamir is also a member of Model Congress with Mr. Miles receiving Honorable Mention at Yale, and as a participant in the Yeshiva Debate Tournament won second place with his partners Claudia Tawil and Jeremy Sofiev.

Tamir’s enthusiasm with learning flows into his deep interest in Judaic studies, his favorite subject being Chumash. This past summer, he was inspired by his uncle to participate in the Daf Yomi. The Daf Yomi is a worldwide study experience of learning one page of the Gemara every day. Under this regimen, the entire Talmud is completed in approximately seven years. Upon completion of the cycle, an event called Siyum HaShas celebrating the culmination of the cycle of learning takes place around the globe with tens of thousands within the Jewish community bringing a feeling of closeness and international unification. This commitment is a testament to Tamir’s dedication to himself and Judaism as a whole.

Tamir’s future intention is to enter the world of real estate and possibly law. Last summer he worked with his dad and thoroughly enjoyed it. He says he feels he could express his creative self through building and management and in his usual point of view, make it what he wants. He looks forward to furthering his role next summer.

In addition to his more light and fun hobbies of basketball, football and learning to cook, he has begun to invest on his own. Tamir does all kinds of research on how to find a good stock, decide to invest and generously shares his info with his classmates. Sharing is important to Tamir spurring him to spend time helping others as a volunteer in Friendship Circle. He says he wasn’t sure what to do at the start, but he learned how to interact and work with the children. This is one of his main tenets of his own life – even if he’s not good at something at the start, he is willing to stick with it to get better and more comfortable. It’s okay to be uncomfortable, because it probably means there’s growth.

Tamir has done quite a bit of traveling with his family including Thailand, Morocco, spending a Passover in Spain, and having his Bar Mitzvah in Israel. He is fascinated by experiencing Jewish culture in different countries seeing differences in the people but also the similarities and feeling the universal Judaic connection.

On a light note, something very few people know (and now everyone will know…) is that Tamir loves to type! He does competitive online typing saying it’s not only fun but has seriously improved his typing skills. In addition, he collects snow globes from each place he travels, has a pet goldfish named Nemo, and because you love to know – his favorite food is French fries and favorite color is any shade of blue.

Tamir says he is not a “giver upper.” With all these endeavors under his belt, it seems he would already be a senior getting ready to move on to college. The thing is he is in tenth grade. Where else can he go from here? For Tamir, it looks like the sky’s the limit. Just like a skyscraper leading the eye up to the clouds, Tamir will continue to honor his place as the number forty-three implies, with abilities, discipline, commitment, perseverance and the desire for achievement.