You are here: Home » HS Student of the Month » Robert Ohebshalom 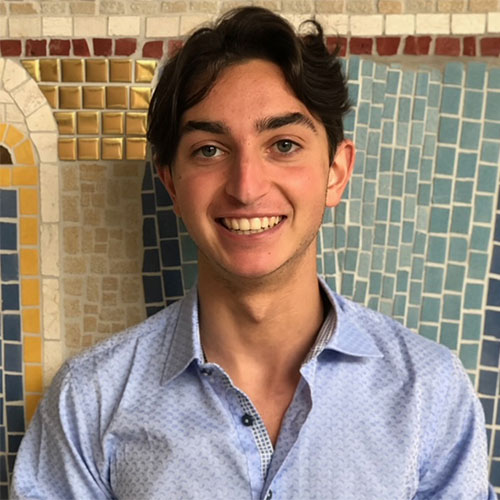 Meet Robert Ohebshalom, our October 2020 Student of the Month

Here is the eternal question.  Are true artists born or made?  Five minutes spent with October Student of the Month, senior Robert Ohebshalom, and the answer is clear.  They are definitely born.  Technique can be taught, but creativity is in the soul.  Such as it is with Robert in everything he does and says.  He sees the mundane and his imaginative mind translates it into something amazing.

It’s a good thing, too, because he plans to be an architect.  Robert says it all started when he was a child waiting in line at an airport.  Even at such a young age he was observing and analyzing structure and how to solve problems within spatial environments and conditions.  Once home, he grabbed his Legos to start designing model airports and planes.  His doodles were not mere swirls and scribbles, they were houses and skyscrapers.  From there he moved on to researching famous architects and learned about Frank Lloyd Wright and Frank Gehry.  He loves Wright for his use of open space, light and connection to nature and Gehry for his bold, catchy, eye-popping, gravity defying design.

To feed his need for more knowledge and experience, this past summer, Robert was lucky enough to participate in an internship at the award-winning Mojo Stumer Architects.  There he discovered CAD (computer-aided design software) and convinced the owner to install it on his computer even though he was only there three-days a week for the duration of his internship.  He agreed and Robert has been hooked ever since by motivated self-teaching of the ins and outs of the software.  On his off days, he worked packing and delivering produce for an online produce retailer.  He is the creative idea guy for a project in Mr. Garfinkel’s Virtual Enterprise and a member of the Art Honor Society.  Robert is definitely someone who enjoys seeking a challenge, hard work, variety.

Robert started his school career with NSHA but decided to try public school.  He realized he missed the dual curriculum of both secular and Judaic studies, transferred to NSHAHS in his sophomore year and has been especially enjoying Israeli and Jewish history and Holocaust studies.  History and math are high on the list of most enjoyed subjects as well.  Last year, he was on the varsity hockey team and would have been this year as well, but you know the story.  Robert is also a big car lover.  He chose to drive a stick shift just for the fun and the feel of it.  He regularly attends car shows of course for the great cars but also because of the great community of many types of people all with one common passion.  Last year he was considering starting a Car Club at North Shore but again – same story.  However, he is reviving his idea to start something for the spring semester.  Car lovers, get ready!

Other favorite recreational adventures are skiing and travel.  He attended Camp Kanfei and was able to ski in New Zealand (way too icy), Colorado and Utah (best conditions ever).  His most memorable trip was with his grandparents spending three weeks in Iceland, Russia and China with glaciers and the Great Wall of China being the standout moments.  And of course, there’s Israel!

Robert Ohebshalom is someone who sees beauty and possibility everywhere he looks.  His mind is always working and questioning what can be done better or differently.  His imagination is so fast and so full of ideas that he can’t get them on paper fast enough.  He is the artist whose artistic medium will be the stuff of buildings – mortar, steel and glass and whose designs and colors will encompass the inside as well to enhance the quality of the lives of the inhabitants.  This is his dream and we can see it.