You are here: Home » HS Student of the Month » Jack Henry Applebaum 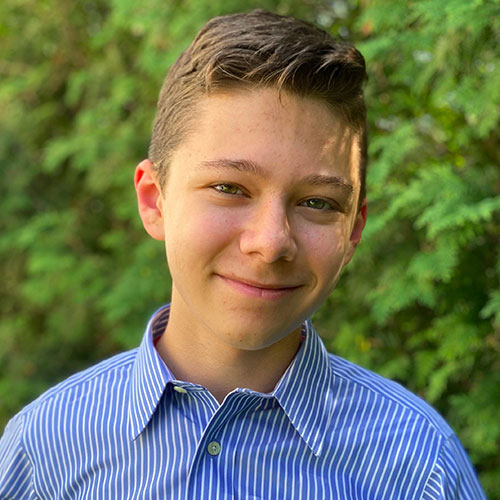 It’s not often that you meet a high school student with a three-page resume.  Jack Henry Applebaum, the September student of the month for the 2020-21 school year has accomplished so much during his tenure at North Shore that he not only filled three pages but could probably fill a small volume with his interests and efforts!

Jack Henry’s (yes – he prefers his full name) last name means apple tree.  Many say the meaning of the apple tree goes much deeper than the creation of the fruit itself but instead is a symbol for bringing forth a truthful life, abundance, the ability to stay focused and the determination to do good.  Jack Henry is known for his strong efforts and achievement of many of his set intentions.

Investment banking is Jack Henry’s career goal, and he has the skills and traits necessary for success.  Setting the groundwork, he has been an avid member of Mr. Garfinkel’s Investing Club and is this year’s President.  He is also starting a new Global Finance Club to further enhance his passion with the innovation, leadership experience, analytical thinking and international outlook needed in his chosen field.

In the realm of goal setting, Jack Henry says when he started at North Shore in ninth grade he decided to do well.  An “I can do this” self-motivating attitude brought him from low expectations of himself to high expectations.  This deliberate shift in thinking changed everything about his school career.  His grades soared and his enthusiasm for trying different things was ignited by increased confidence.  He began participating in competitions including playing the piano and cello at NYSSMA that included an award for Outstanding Performance, was captain of the JV College Bowl, and joined Torah Bowl.  With an outgoing engaging personality Jack Henry also participated in Yale Model Congress, Debate Team and has been a NSHAHS Open House volunteer!

Jack Henry is not one to accept the status quo.  He says that just focusing on school and fun is not enough.  Helping others gives him the rewarding experience that rounds out life, because offering warmth and kindness goes a long way.  He is a peer tutor in College Accounting and Math, a long standing member of Friendship Circle working with special-needs children, Tomchei Shabbos delivering food to the needy, and Yachad helping with special-needs adults.  A standout moment was taking the time to encourage, overcome fear and develop trust to help one of the participants to get off the bus and join the group.

As the saying goes, “all work and no play…,” but Jack Henry has plenty of fun!  He is an expert snow boarder and had the good fortune of attending Camp Kanfei Nesharim, traveling and engaging in his sport in Australia and New Zealand.  There have also been memorable family ski trips to Utah and Colorado.  Italy is his favorite destination so far for the great snow and the untouched and abundant Jewish community there.  He developed a new perspective on the world and widened his horizons while realizing the common denominators with the people he met.  Of course he loves Israel for the spiritual connection and being different than anyplace else.

Jack Henry is also a cook who loves exploring foods and deconstructing dishes to see how they’re made.  He is a pizza connoisseur who makes his own dough from scratch and grows fresh basil and tomatoes for a family favorite NY pizza.  He also makes fresh pasta (pan-fried Orecchiette is his specialty).  Serious swimming and reading are top favorites as well.  Oh – his favorite color is Black because it goes with everything.

Clearly his name holds the secret to his success now and for his future.  The ancient concept of the apple tree as a symbol for beauty, sweetness and prosperity with the hardiness of the fruit representing strength and growth is in alignment with Jack Henry’s personal philosophy of life.  “Don’t be afraid to work hard.  There is intrinsic value in hard work.  Nothing is ever wasted even if you don’t reach your goal and will seep into other areas of your life.”

We are confident you’ll reach any goal you set your sights on!  Have a great senior year!