Sigd – The Jewish Holiday You Haven’t Heard About 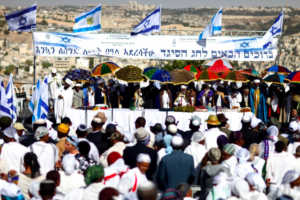 The Ethiopian Jews are one of the ten tribes that were exiled from Israel before the destruction of the first Temple.  They are Jews like us, but because they were separated from the rest of the Jewish nation a long time ago, they don’t have the same traditions that we have.

In Ethiopia, they lived in closed communities helping them keep the traditions that they had prior to exile. Those communities were called “Beta Israel”.  As part of the traditions they have kept for all of these years, there is one very special holiday which occurs at this time of year.

The Sigd is a holiday that Ethiopian Jews celebrate on ,כ“ט בחשון 50days after Yom Kippur.
On this holiday, they go up onto the closest mountain and make a ceremony of renewal and remembrance of the pledge made at Mount Sinai between Am Israel and Hashem.  In the ceremony their rabbis (known as “Caise”) pray and read from the Orit,which is their version of the Torah.

The Sigd is also a day of hope and longing to return to Jerusalem. The most important thing for the Ethiopian Jewish communities was returning to Israel. They believed that keeping God’s commandments and continuing to climb the mountain will lead the community to fulfill their dream of returning to the land of Israel and Jerusalem.

For many years the Beta Israel community in Ethiopia kept their tradition of climbing a mountain and longing to return to Jerusalem. After many years their dream became a reality….

In two amazing operations, Operation Moshe and Operation Shlomo, more than 35,000 Jews were brought from Ethiopia to Israel.

Even today, when the Beta Israel are already in Israel, they keep their tradition and go every year to ארמון הנציב, where there is a clear view of הר הבית (the Temple Mount). They read in the Orit and pray that one day they will be able to see בית המקדש.

Click here to check out this video about Sigd. 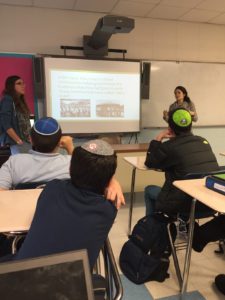 Floating in Salt Water and Above New York City

It was a great week full of science experiments and travels.

We are not just a school – we are a community.